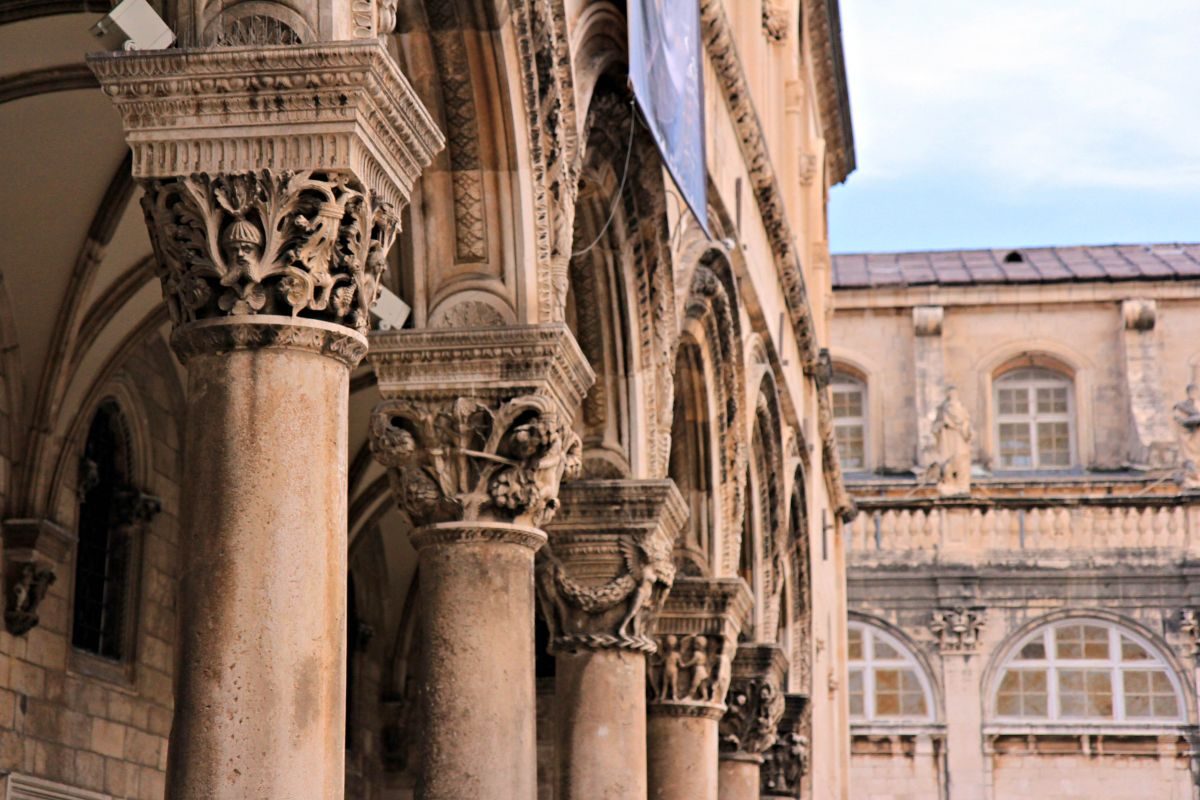 Numerous monuments, which testify to the advanced practices of politics, medical care and the everyday life, are a constant reminder of the Republic’s richness.

“Non bene pro toto libertas venditur auro” or “Freedom is not to be sold for all the gold” was the Republic’s main guiding principle in governing. The decision of banning of slavery in 1416 is statement enough of how much they cherished freedom and advocated it. The first ones in Europe to do so and as much as 400 years before many of the other states in the world.
Ivan Gundulić, the famous Dubrovnik writer, sang the hymn of freedom in the pastoral “Dubravka”. The first verse of the hymn is world known and causes goosebumps every time it is recited, – “Oh beautiful, oh dear, oh sweet freedom“. Every year, at the opening ceremony of the Dubrovnik Summer Festival, the Libertas flag is raised to Orlando’s Column which marks the beginning of the 45 days long manifestation of artistic expression in Dubrovnik.

The Rectors palace, located on the main street of Stradun was a place of governing. Above the main entrance, in stone engraved, is a saying: “Obliti privatorum publica curate” or “Forget the private and take care of the public“. The government of the Republic consisted of the Grand Council, the Small Council, Senat and the Rector.

The Grand Council was formed of patricians who would become of age and ceremoniously introduced at the beginning of every year. The Grand council had all of the political power but they faded with the formation of the Senat. The most important function, until the end of the Republic, was the monthly election of the Rector.

The Small Council was the executive body of, first, the Grand Council and, later, of the Senat. In the beginning, it consisted of the rector and 11 councilors to later be reduced to 6 councilor-senators alongside the rector.

The Senat or the Rogatory council was at first not a permanent part of the government but convened when summoned or asked to. After it was made permanent, the Senat became the most important political body of the Republic, making all of the specific decisions regarding domestic and foreign policies. By doing so, it became the government of the Republic and made it very effective.

The Rector was perhaps the most interesting person in the political establishment of the Republic. Residing in the Rectors palace, he was not permitted to leave it, excluding a couple of scenarios (such as for example- the possibility of diplomatic travel). He was separated from his family during his period of reign of only one month. The one month term of office was there to prevent extensive fixture of reign and to exclude the possibility of the introduction of self-government. The Rector was the keeper of the state seal and keys of the city which he gave back to the people every morning as a part of a ceremony.

The Dubrovnik Statute is the oldest legal document of the Republic and dates back to 1272. It consists of 8 books which stipulate all provisions of the law. Over the centuries, because of the development of economic and social relations, the need for new laws and regulations emerged. Seven more books were written between 1277 and 1808.

The territorial government was divided between six counts and three captains. They were appointed by the Grand Council for the duration of half or a whole year. Their task was to execute the decisions of the central government.
Lastovo and Mljet had autonomy and privileges according to their own statutes.

The Republic had a provision about never deliberating and making decisions when the south wind, Jugo, was blowing. The writer Tereza Buconić Gović best described the effects of this wind: “It is by itself a punishment; the thought is weary, life seems to run out of blurred eyes and long, tired faces. Not even yourself do you like, how then to judge others with a blurred mind“. It was seen as a mitigating circumstance when judged on crimes committed during Jugo.

In 1395, a law was passed on maritime insurance which is the oldest in Europe. This law is three centuries older than Lloyd’s, which dates from the late 17th century.

Medical care in the Dubrovnik Republic

Medicine in Dubrovnik was never of just local character nor isolated from the practices of the world. In 1301, the medical service was introduced. The Supreme Medical Council was formed in 1441 and the first nursing home was established in 1347.

The quarantine is an original idea of the Dubrovnik Republic and was first introduced in 1377 when the Plague raged. Unlike other maritime areas, because of the quarantine, Dubrovnik was able to continue trade but with delay. The sailors were to stop at one of the Islands near Dubrovnik for one month after which they were allowed to sail into the city harbour if there was no plague on the ship.

The quarantine developed in the next hundred years into an institution with all the accompanying guidelines: regulations, buildings and staff, called  “cazzamortuorum”. The first quarantine was opened in 1397 on the island of Mljet. After some time, the Grand Council made a decision to move the quarantine nearer the City. Construction of the Lazareti at Ploče began in 1590 and was completed 1642.

In Dubrovnik, the role of the medicine makers was, as it was in the Orient, in the hands of pharmacists as opposite to the customs of Europe where that role was reserved for doctors. The first pharmacy in Dubrovnik is also one of the oldest in Europeand was established in 1317 as a part  of the Franciscan Monastery. This pharmacy is is still active in Dubrovnik at the same place. As a part of the monastery, it is possible to visit the museum which features some of the original inventory of the pharmacy.

Already in the middle ages, the Republic sought to employ capable and educated connoisseurs of the art of medicine. They employed doctors from Italy, Spain, Grece and, of course, Jews, who were considered the best doctors in the world. From 1280, 134 doctors and 102 surgeons were in the service of caring for the health of the people of the Dubrovnik Republic.

Today, there are many monumental testimonials of the connection Dubrovnik had, and still has, with medicine and medical care.

One of them is certainly, the Esculap capitel at the Rectors palace. Esculap is the greek cult of the god of health and was brought to Dubrovnik as a part of the religion, of the founding colony of Epidaurus, which was a colony from ancient Greek times.

Dubrovnik and its practices both in governing as well as health care were very advanced for the time of its existence. Today, when in Dubrovnik, people often visit the old Franciscan pharmacy and are astounded by its history. So when in the City, be sure to take your time and discover all of the hidden treasures of the city, made for eternity.