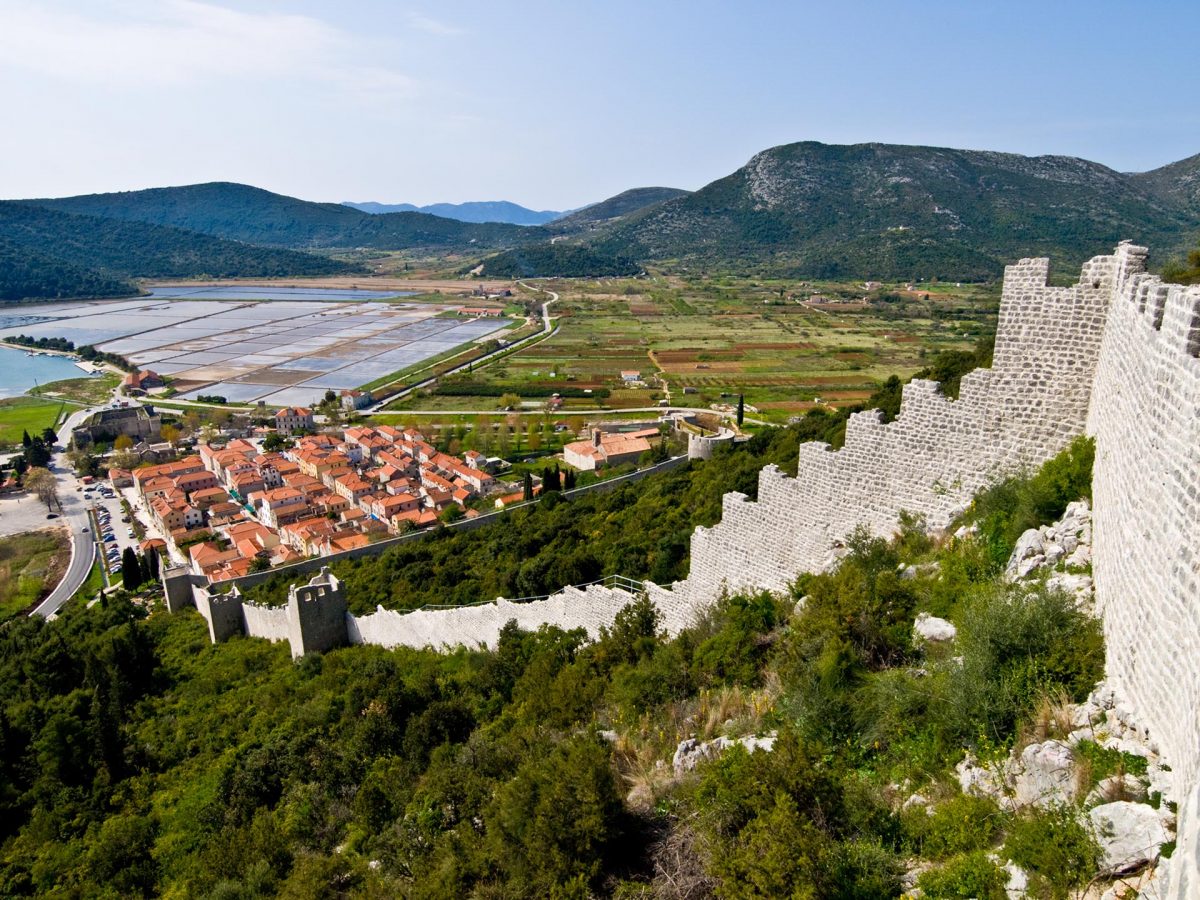 An hour drive away from Dubrovnik you will get to the point at which Peljšac and the mainland connect. From that point, the second largest peninsula of Croatia extends parallel to the mainland in 77 km of length.

The Dubrovnik Republic came into possession of Pelješac in 1333 and it remained in their jurisdiction until the end of the Republic in 1808. From the very beginning, the natural richness was protected by the Republic guarding it so for a long time to come. In 1465 the Dubrovnik Republic builds a Rector’s Palace in Janjina with all that goes with it – a State coat of arms and a statue of St. Blaise, prison, storage, apartment and office for the Rector or Captain. Janjina never was a rectory but a “kapetanija”* and it had a Captain as the head. The only place on Pelješac which was a rectory was Ston and as the head an acting rector. Right at the beginning of the Republics reign over that area, the building began under the hill Podzvizd and on the other end at the little sea. A large and long fortification system was built between the two towns named Big and Small Ston. The defence system had to defend Pelješac, a place of great importance to the Republic, from unwanted visitors. The wall originally measured 7 km but its length has been reduced to 5,5 km due to natural occurrences throughout the centuries; mainly earthquakes. Here you will also find the longest salt pan in Europe dating back to the second century B.C.

Aside from the Ston walls, the second longest stone walls in the world, Pelješac is widely known for Plavac mali, oysters from the Mali Ston bay and highest quality extra virgin olive oil.

The coastal line of Pelješac is 200 km long and the Island itself is home to over 1100 plant species. Pelješac is a place of harmonious small towns, fisherman settlements, untouched nature and rich cultural and maritime history. The settlements of Janjina and Popova Luka testify to the history of maritime families on Palješac, mainly with their architecture. The coast of Pelješac is accented by beautiful coves, white stone beaches, olive trees and hundred years old cypresses. The trademark of this peninsula are however the vineyards which spread across Pelješac. Vineyards of Plavac Mali – an autochthonous sort which grows on the most skimpy soil on the positions of Dingač and Postup gives some of the best, if not the best, red wines of Croatia.

2300 acres are planted across the peninsula, from Ston whose fields are completely covered in grapevine, except for the small portions of brushwood and pines which cut into them at some parts, to Orebić whose vineyards are mostly Postup positioned. In between, following the wine roads of Pelješac you will come across a beautiful small seaside settlement Žuljana, famous for its wine, breathtakingly gorgeous sandy beach and crystal clear sea. Potomje is located in the middle of the peninsula and is the place of, perhaps, most attractive vineyards on Pelješac. On one side the vineyards are protected by stone massif from cold winds and on the other they fall steep to the sea, becoming so perfectly positioned towards the sun. This position is called Dingač.

The distinctiveness of Pelješac surely lies in the extremely steep terrains of the Dingač wine position, which are very hard to access but where the sun shines upon the vine in two or even three ways. The first is the common, direct way, the second is the reflection from the stones of the rocky ground and the third the reflection of the sun’s rays from the sea surface onto the vine. This highly unusual occurrence reflects, naturally, on to the quality of grapes. The Malostonski bay is cut in between the peninsula and the mainland and the home to a sea nature reserve, where oysters, mussels and high quality fish thrive. Because of its location in the middle of the Adriatic, which is the richest in fish, locals have always fresh fish and seafood on hand. The basis for the local cuisine is fresh white fish, mostly baked. The most popular dishes include octopus salad, baked octopus in wine sauce, stuffed squid, crabs, lobsters and tuna or another fish pate for hors d’oeuvre. Various shells and crabs are cooked in a wine, tomato and garlic sauce on Pelješac as well as the most places along the Croatian seacoast.

Naturally, the special flavours of the dishes come also from the numerous fresh Mediterranean herbs that grow on the peninsula. Pelješac it the home to 1100 different plant species and subspecies of which some are endemic. The Geranium dalmaticum is only found on Pelješac and is one of the most recognisable endemic plant species of Croatia.

Most importantly, when at Pelješac, stop for a moment and just breath in and sense your surroundings. Beautiful landscapes, rocky steep slopes that go right down into the sea, skippy soil on which the best vine and olive trees grow, bumpy roads leading you to rocky beaches with crystal clear sea and accented with hundred years old cypreses and a history to leave you talking about for weeks after you’ve gone. Indigenous species of plants and animals, amazing seafood and local dishes, wine roads and family run businesses and the most beautiful sunsets you will ever experience. Take your soul on a vacation and sail away on the fluffy cloud of the Pelješac dream.