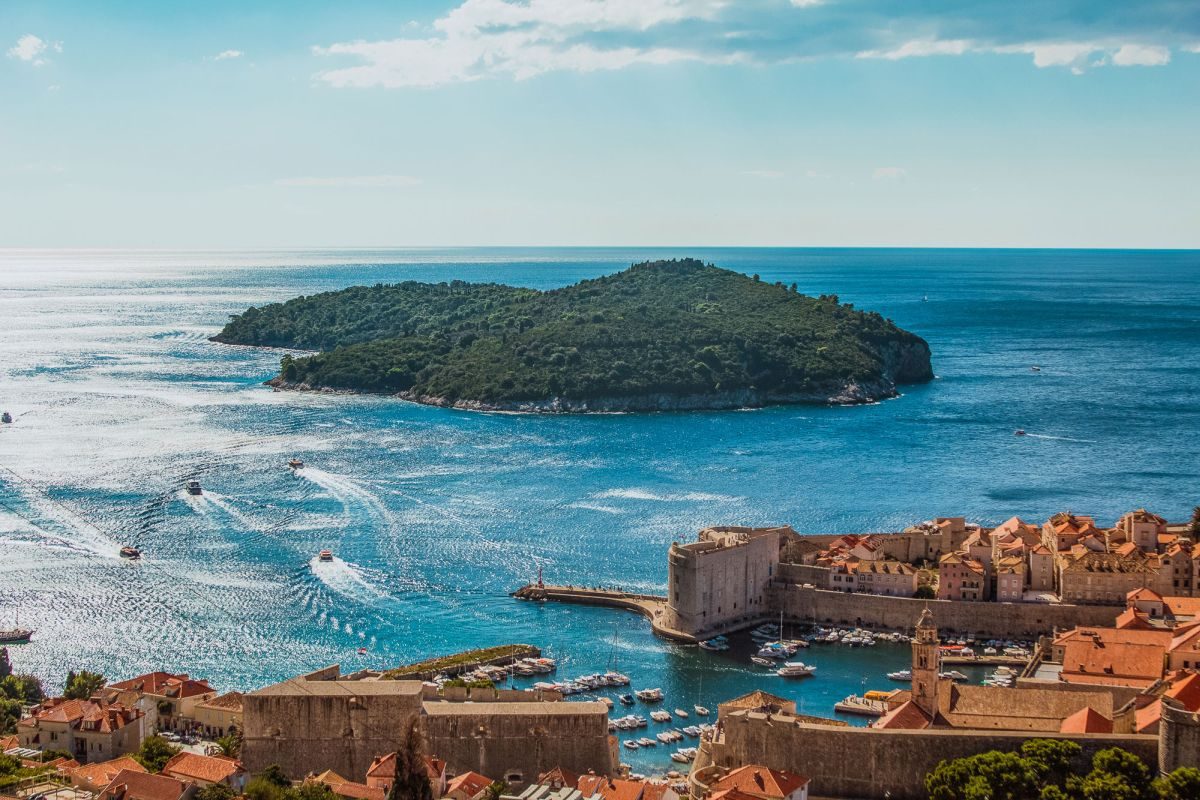 Lokrum, the beautiful island located just a short boats ride away from the Old town Dubrovnik, was inhabited in prehistoric times. A fragment of a writing of a tombstone and four relief fragments built into the wall of the Benedictine Monastery testify to that fact. According to some data, as early as in 915 Lokrum was frequently visited and at some points inhabited by Basilian monks.

The monastery itself is mentioned for the first time in 1023 as the first in a row of Benedictine monasteries in the Dubrovnik Republic. The founders are said to have been Peter from the Monastery of St. Maria in Puglia and a Dubrovnik priest Leo. They were very quickly connected to the centre of the Benedictine order, the church in Monte Cassino. The legend of the curse has its origins in the decision of a French army general, who ordered that the Benedictine order be exiled from the island of Lokrum. He chose noblemen from Dubrovnik to carry out his orders.

Shocked by the order of the general, the Benedictines tried to stay where they belonged. After their efforts had finally failed they went to the church of St. Marija and served the last mass. After the service, they put on their hooded robes and lined up one after another to form a funeral procession. They created a circle around the island and lit torches as a sign of a curse. The torches were turned upside down and allowed to burn the ground below them. They circled the island three times that long, dark night while chanting the words “Let be thy cursed, one that acquires Lokrum for his own personal pleasure”. When dawn came they boarded ships and took off into the open seas.

They never looked back or returned to the island after that. Whoever came into possession of the island after that fateful night finished in tragedy. One of the three noblemen who bought the message to the Benedictines had an accident and fell through a window. The second was washed away into the sea and the last was killed by his servant. After the fall of the Dubrovnik Republic, Captain Tomasević became the owner of Lokrum. He was a very wealthy man, but somehow through unforeseen circumstances, he became completely bankrupt right after the purchase of the island. He had to sell the island and this time, the buyer was the younger brother of the Austrian Emperor, Duke Maximilian.The Duke immediately started reconstruction of the Benedictine Monastery as his summer residence. He even put his initials on all the buildings and the keys and locks carried his monogram. He created small paved paths through the gardens of roses, lavender, oleander and lemon trees. He said that the island felt like paradise on earth and brought his wife, Princess Charlotte, to live with him there.

However, he was sent to Mexico in 1864 and appointed the Emperor of Mexico. After only three years he was captured by the military of the revolutionary general Juarez and shot In Queretera, Mexico on the 19th June 1867. The next owner was Doctor Jakopovic from Budapest. Shortly after becoming the owner an embarrassing truth about this prominent gentleman came out. It was announced that the so-called Doctor was, in fact, a barber who had illegally acquired his academic title during the revolution of 1848 from a dead soldier. The Doctor lost his properties and wealth after this fiasco and consequently lost Lokrum. The next owner was a young Hungarian military officer. The first day of his arrival in Dubrovnik he went out to the island. The sea was relatively calm when he set out but in the middle of his short voyage a strong wind blew up and sank his boat. All of the crew and the unfortunate officer were drowned. The island of Lokrum, also known as the island of kings, was first mentioned in 1023 when the Benedictine abbey and monastery was built. Legend says that Richard the Lion-Heart shipwrecked there in 1192 on his way how from crusades. He pledged to build two churches if he survived – one on the island where he was cast ashore and one in England. On the plea of the citizens of Dubrovnik, the church was built in the city instead.

The name Lokrum comes from the Latin word “acrumen” which means “sour fruit” and has its origins from the tradition introduced at the time of the Benedictine monks of bringing and cultivating exotic plants on the island from all over the world. Later Maximilian Ferdinand of Hapsburg laid out next to a mansion a breathtaking garden with little pathways, beautiful plants and other botanical wonders. Today one can see there a Botanical Garden, founded in 1959, that cultivates endemic tropic and subtropical plants from all over the world.

When walking around the Nature Reserve and Special Forest Vegetation Reserve Lokrum one will find the Dead Sea, a little lake that is linked to the sea and the fortress “Fort Royale” that was built in a star shape by the French in 1806 at the highest point of the island giving everyone a beautiful view at the Old City of Dubrovnik. Don’t step on the peacocks walking around freely on the island – maybe you find a feather for your own special souvenir of Lokrum.

Recently, an exhibition has been opened at the island displaying in a unique way the stories, legends and tales of Lokrum. When there, be sure to visit it!