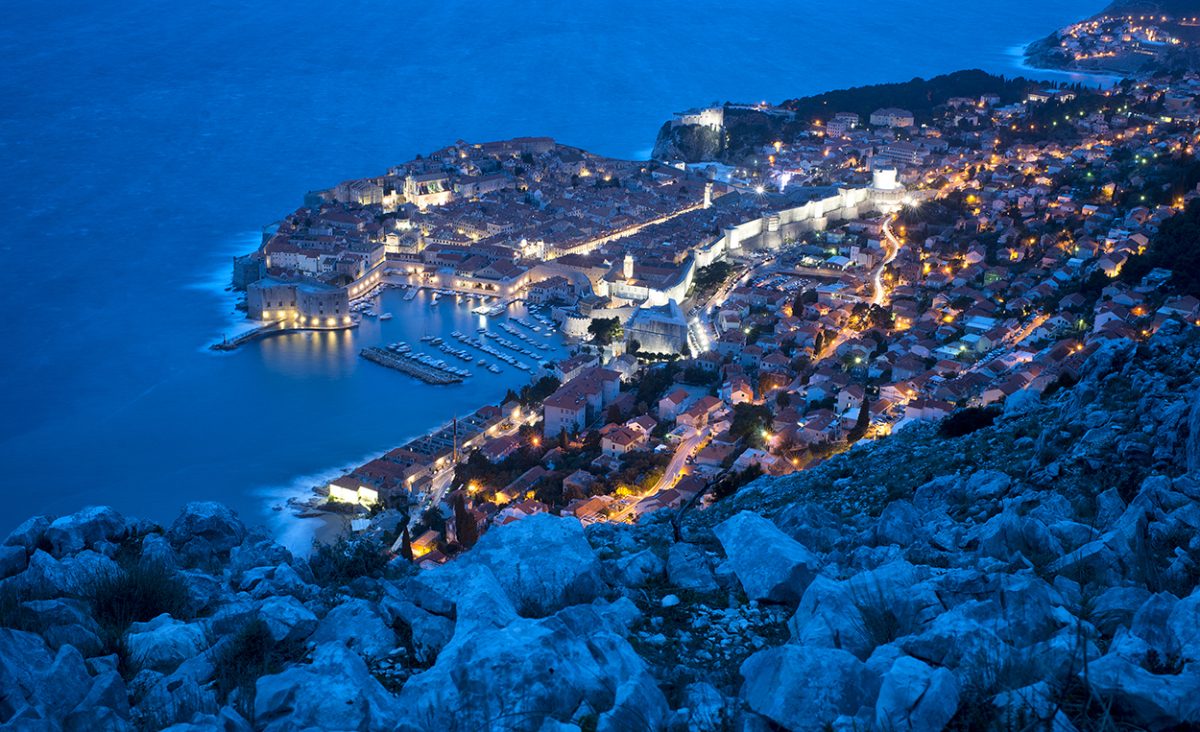 We finished our last walk at Porporela breathing in the sea. It is only fair that we continue where we left things of the last time. The next part of our stroll is set underneath the starry night sky on a hot but breezy night begin July. Every July 10th for the last 69 years Dubrovnik welcomes it’s perhaps most loved cultural event – the Dubrovnik Summer Festival. People gather at Porporela and the Modern History Museum at Ploče to see the fireworks marking the beginning of the festival. This July 10th they will do so for the 70th time.
With walls of stone and the heart of art, Dubrovnik is a very special place from July 10th to August 25th. Music, dance, ballet, theatre and exhibitions lure you into various historic places throughout the city. It is a truly unique thing to experience all of it in Dubrovnik.
Stradun is teeming with life in summer days but the city is, perhaps, most beautiful at night. After sundown, outlined by the street lights and the moonlight, the city changes into an oasis for the eyes and the heart.
Smooth Jazz music making its way through the narrow streets and leading you into wine bars or small restaurants; a bit of Rock’n’Roll calling your name from the nearby Lazareti or Orsula with the most beautiful vistas upon the Old city; modern beats coming from the most unlikely of places – Revelin Fort; Dubrovnik’s nightlife has a bit of everything for everyone.
Although one of the most popular ways to travel and vacation recently is by cruise ships, and you have that option for Dubrovnik, you really need a bit more time to experience Dubrovnik fully.
Its culture, people, landscape and way of life is unique and breathtaking. Conversations flow with such ease when you are open to a couple of jokes and occasional coffee or drink. And be prepared. Dubrovnik, as is most of Dalmatia, is easygoing and with no hurry, so coffee breaks tend to get a little bit longer than what is considered to be the appropriate time for it in the rest of the world.
This way of life, a very recognizable characteristic to Dubrovnik and Dalmatia, has a name.
Fjaka, a way of living and enjoying life, has been brought to perfection. Some can say it is just an excuse for laziness but far from it.
Fjaka is as it follows ” A psychophysical state of longing for nothing. It is a common mistake to confuse Fjaka with laziness. Unlike the latter, Fjaka is a sublime state of the body and mind to which all of humanity aspires. While in India and elsewhere it is attained by prolonged fasting and meditation, in Dalmatia it is a gift from God”.
It’s not easy to follow a strain of thought when writing about Dubrovnik. There are so many things to say and describe but that post would go on forever. So let us get back to the walk.
Music and art are such an important part of Dubrovnik, as is it’s rich history.
When coming back from Porporela you can go through a small passage in the Wall if you want to explore a bit. Facing the way you came you will see the entrance to the Aquarium. Located in the St. John Fort, the aquarium offers insight into the underwater world of the Adriatic. The aquarium is set in a way which least disturbes the fish and is dark and quiet. You should follow the instructions to experience the place fully.
Following the street, you will come to the most important sacral building of Dubrovnik, the cathedral of the Assumption of Mary. The cathedral was built on several other buildings dating back to the 7th, 10th and 11th century.
It’s time for a drink by now, don’t you think. Regardless, day or night, Bunićeva poljana is one of your best choices if you want to get away from the bustle of the main street. And if it is time for lunch or dinner just keep going down the street for fifteen seconds and you will reach the Gundulić square. Dubrovnik just loves its squares. The view upwards from the Gundulić square has become a kind of a legend being the place of massive happenings in films and TV series. One of the most popular must be the “Shame” scene from Game of Thrones. In reality, the stairs lead up to the Ruđer Bošković square where the church of St. Ignatius and the Collegium Ragusinum is located. The Jesuits founded the Collegium in 1658 and to this day it is still being used for the education of young people.
It is time for a sunset walk back to Stradun, Orlando’s column, the patron saint’s, St. Blaise church and the Sponza Palace. All of them located facing each other. We will finish this walk with the latter as it is a place of great historical importance and a good way to take a break till next time.
The palace derives its name from the Latin language meaning “the place where rainwater is collected” although it wasn’t always called that. Its second name is Divona. Throughout history, it served a variety of public functions like a customs office, armoury, mint and school. It was a place of the Academia dei Concordi in the 16th century. The palace miraculously survived the 1667 earthquake undamaged unlike the rest of the city which was to a great part destroyed. The Dubrovnik Archive is located in the Palace and holds documents dating back to to the 11th century.

Dubrovnik is a gem waiting to be discovered and when once visited is surely a place to return to. Till next time and more information on Dubrovnik and then Riviera enjoy the gallery and make preparations for your next holiday. It has to be Dubrovnik! 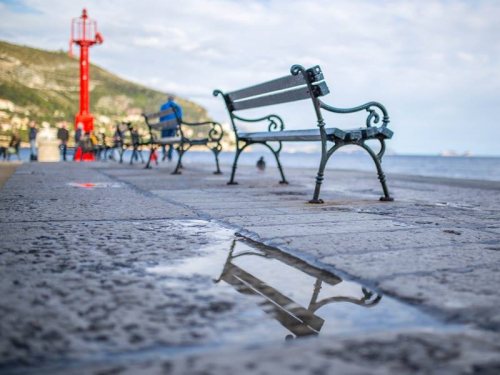 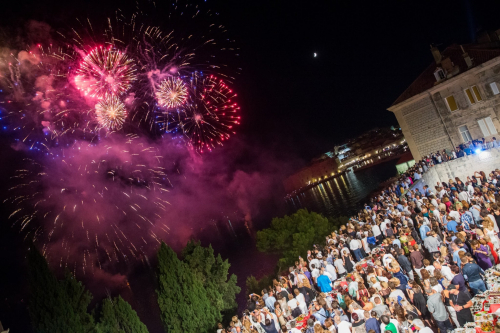 Firework view from the terrace of the Modern History Museum at Ploče. 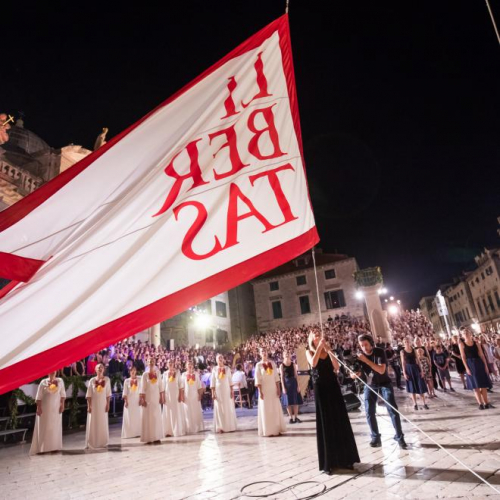 Opening ceremony of the Dubrovnik Summer Festival in front of the St. Blaise Church 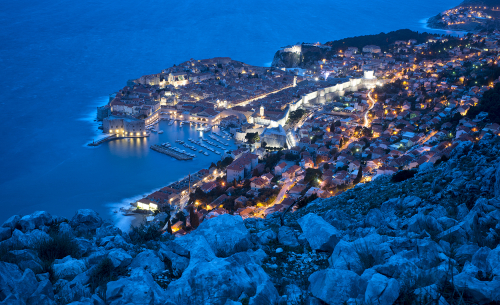 The Dubrovnik aquarium is located in the St. John Fort. 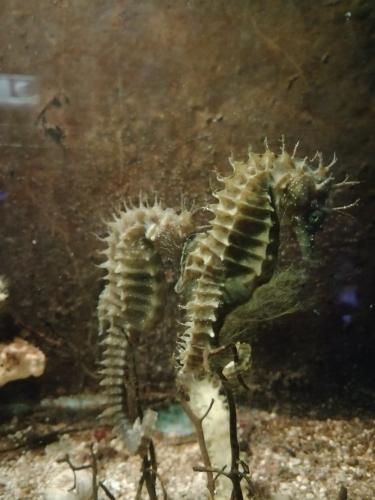 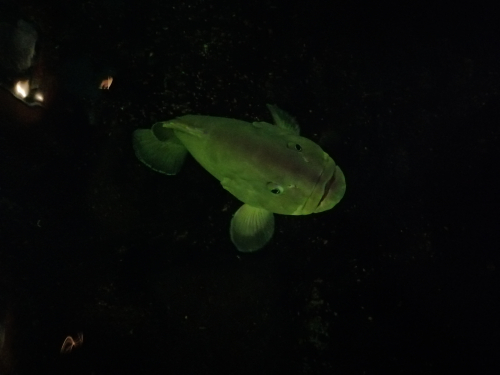 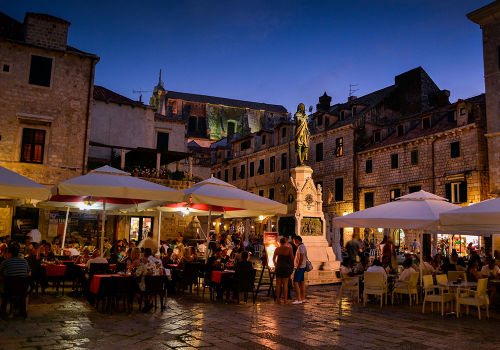 A very old picture postcard from the 19th century. 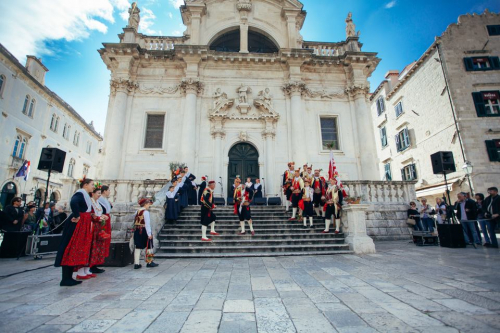 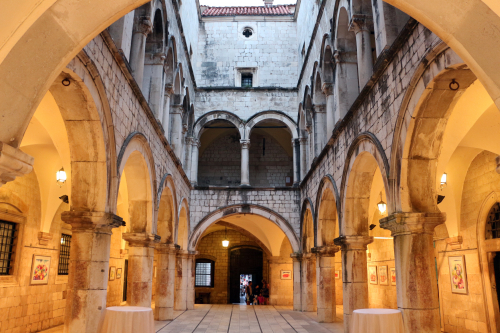 The look from the inside of the palace 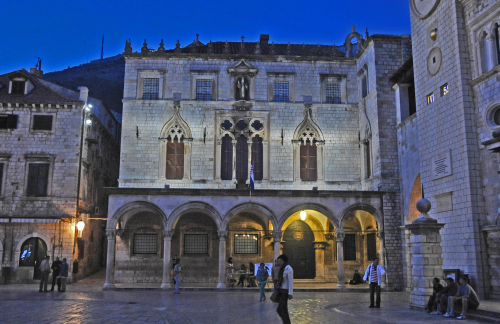