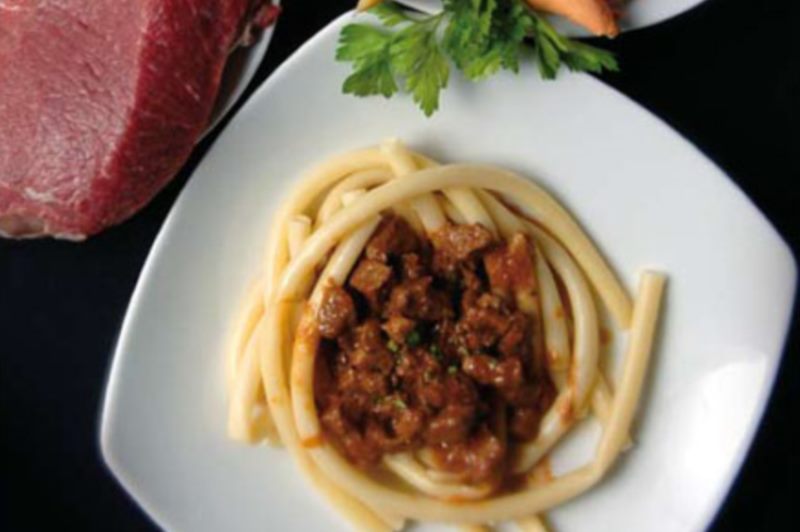 Taste this Dubrovnik dish typical of winter and great festivities which the Dubrovnik aristocrats prepared on St Blaise Day. The dish made of paste and meat sauce was called Sporchi Macaroni because of the way it used to be served. Namely, after the meat sauce had been eaten, the last guest were served only the paste with the remaining sauce with no meat – the stained, or sporchi macaroni.

The dish Sporchi Macaroni consists of meat sauce with macaroni or flour paste made in the form of tubes (called makaruli in the Dubrovnik dialect), being the basis of the menus for the Dubrovnik carnival and festivities. The Sporchi Macaroni recipe reveals a direct influence of the Italian cuisine, and bears a resemblance to the so called ragu di carne.

Preparation:
Remove tendons and fat from meat and cut it into cubes (size 1,5 x1,5 cm). Fry chopped onions in hot pork fat. When onions soften and become glassy add meat. Simmer until the liquid from the meat evaporates completely. Add boiled tomatoes and stew briefly. Poor over wine and liquid (hot water). While simmering the dish in a pot without a lid stir occasionally. Add chopped parsley and garlic, cinnamon, cloves, bay leaves, pepper and salt. Continue to simmer slowly about two hours, depending on the quality and quantity of the meat, adding some hot water occasionally.

Wash the boiled and strained macaroni lightly in lukewarm water, strain thoroughly, poor over melted fat, stir and mix with the meat and stew. Leave for ten to fifteen minutes so that the ingredients blend well.

When served, sprinkle with grated home-made ewes or goats cheese.