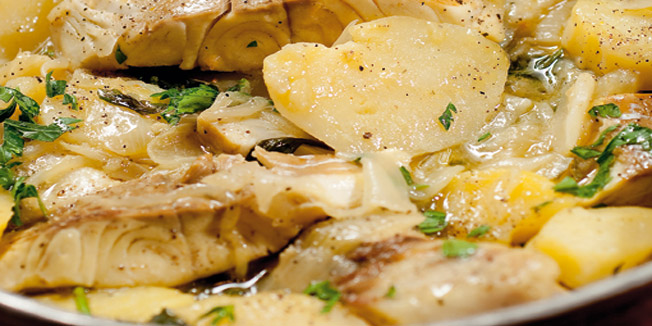 ‘Poor man’s food’ of previous times has now become a delicacy. We haven’t invented anything new! Our nanas and grannies were able to feed and satisfy a big family with a little codfish and only few kilos of potato. The value of cod is not to be questioned. I remember my earliest childhood and the obligatory daily spoonful of codfish oil that I had to take (oil from codfish’s liver). It was six decades ago and it has been unforgettably disgusting. However, I never had the flu. And also, there were no antibiotics in those days. Cod comes from the fish family called Gadidae, same as our hake. There are several dozens of their species. All their species cost a different amount. The best one is the most expensive that you can find on the market. In the codfish homeland, Scandinavia, it is being used mostly in a fresh or salted condition. Dried cod s traditionally made only for the Mediterranean market. It is a difficult task to give the right advice to an untrained buyer about how to recognize a quality cod. The mottles, the colours, in what way are the pectoral fins overlapped, etc., are all questions to be addressed for the ultimate cooking and tasting experience.
Enjoy the codfish for Christmas Eve: you don’t have to worry about calories, and it will provide you with sufficient proteins, and it will also stimulate the synthesis of serotonin, the hormone that is responsible for promoting enhanced moods, says the nutritionist and culinary arts’ academic Božo Lučić, and with this advice he gives you few original recipes for preparing the codfish.

Cod is an exquisite source of selenium and proteins. It is a very good source of vitamin B6 and also of phosphor. Further, it is a rich source of omega-3 fatty acids, B12 vitamin, potassium, vitamin D and niacin. The human race has been enjoying the codfish taste since ancient times. Not only has it been enjoyed fresh, but as the time passed by certain preservation methods salting, smoking and drying were developed, making it easier to keep the cod more easily preserved for a longer period of time and transported to more distant parts of the world. Cod was one of the most commercially significant species of fish utilized during the Middle Ages in Europe. Salted and dried cod is still a very popular dish in many countries, especially in Norway, Portugal and Brazil. Here, in our region, it is traditionally related to Christmas Eve cuisine, and the custom of having codfish for Christmas Eve dinner has been especially nurtured in Dalmatia. The preparation of cod is a ritual that takes more than one day, since the fish has to be tenderized by soaking it into water before cooking. First, it has to be beaten sufficiently with a mallet, and then it has to be left soaking in water for 2-3 days, and, further, the water has to be changed several times a day. Codfish has to be cooked in cold, salted water, and after it is cooked, the meat should be separated from the skin and bones. Other ways of preparing cod depend on the tradition and the preference of the person who will be enjoying it, but it is most popularly prepared “in bianco”, “red,” or in a casserole or a pâté.

Cod is, without a doubt, an excellent low-calorie source of proteins since it provides almost 50 % of the daily nutritional requirements in only 100 grams, and consuming it does not overburden us with useless excessive calories. The energy value of 100 grams of cooked cod amounts to almost 100 kcal, which puts this food into the group of “light” products. There is an additional appealing bonus in cod consumption in that it provides us with a high share of the amino acid tryptophan, a molecule that plays an important part in relaxation and sleeping. Tryptophan is an amino acid necessary for the physical synthesis of serotonin, which we usually call the “good mood hormone”.
Thanks to its especially favourable nutritive profile, cod is now being considered as a food that is useful for preventing and treating numerous diseases.

Frequent consummation of fish, especially fish from the cold northern seas, is recommended to people with atherosclerosis and heart conditions. Numerous scientific studies have shown that people who eat fish on a regular basis carry less danger of developing heart diseases in comparison to persons who don’t have fish in their personal diets. Cod is an especially good ally in preventing cardiovascular diseases because it contains omega-3 fatty acids, and it is at the same time a good source of vitamins B6 and B12, which help in lowering high levels of homocysteine. High levels of homocysteine create an independent risk factor for heart diseases and myocardium infarct. Cod is also a valuable source of vitamin B3, and it is known that this vitamin has a favourable impact on high levels of cholesterol in serum.

Ingredients for 2 servings:
250 g cod prepared “in bianco,” 1 egg, flour, breadcrumbs, milk (or carbonated mineral water), frying oil, salt and pepper.
Preparation:
Prepare the mixture for frying with one glass of milk (or water), 1 egg, and 2 spoons of flour, salt and pepper; mix all ingredients well. Make dumplings from cod “in bianco,” utilizing a teaspoon, which you will dip into the mixture and fry in a large amount of hot oil. Drain the ingredients, dry them with paper kitchen towels and serve them with a slice of lemon. Instead of this mixture, you can use a classic method and dip codfish dumplings first in flour and then in whipped egg and finish with dipping them in breadcrumbs.

Preparation:
Take dry codfish and beat it well with a mallet or a pestle and leave it soaking in water for 24 hours (replace water if necessary). When it becomes flexible, start cooking it until the meat and bones in the middle aren’t quite softened. Bones and black skin have to be removed from the cooked cod. Keep the water from cooking the cod for the purpose of later pouring, using it as stock. Chop the onion and fry it in olive oil until it becomes golden brown, then add chopped garlic which you should then lightly fry, and after finishing that task, chop the cooked and peeled cod into smaller pieces by mixing it, then add tomato puree, tomato pieces, wine, salt, pepper and stock, as required. Mix it all together and let it cook for an hour while lightly stirring it. In the end, season it with parsley, and the best way to serve it is with homemade polenta and cooked potato.

Leave mid-sized codfish soaked in cold water for two days prior to cooking. Cut it into three to four parts; in places where it is the firmest, around the head, you can beat it with a hammer and leave it soaking. After the first day, throw away the water, pour in fresh water (keep this water for later, you will need it) and leave the cod soaking for another day. When the fish is nicely tenderized, take it out of the water, and clean it well, taking special care of the area around the head, then take off the fin and take out the bone.

Preparation:
When you have taken out the bones from the cod, and also when you have taken off its fins and skin, the fish is ready to be cooked. Peel the potatoes and cut them in slightly thicker slices (about one centimetre), dice the whole garlic into small pieces and use lots of parsley (handful).

Pour in the liquid up to the top of the potatoes, and let it all cook for at least an hour and a half. Do not stir it; only lightly shake the entire pot. Of course, this dish is served on Christmas Eve and on Good Friday.

20 dag of cod fillets
20 dag of potato
10 dag of onion
0.1 dl of olive oil
salt, pepper, fresh rosemary
1 dl of high quality white wine
Leave the codfish fillet in one part. Peel the onions and the potatoes and cut them into thick slices. Put all the ingredients into a metal, previously greased round frying pan. Season with salt and pepper, and after you cover the pan, shake it so the ingredients will be mixed and slightly oiled. Leave it for 40 minutes on the temperature used for grilling meat. Take the pan from the grill and uncover it, add fresh parsley and a quality white wine, mix it all together, then cover it once again and grill for another 20 minutes.

Cod is a delicacy which can be made in numerous ways. This time, I suggest a recipe with cheese, polenta and salted sardines, with a caveat that this is not a traditional dish made during the fast since, formerly, during fasting times, one was not allowed to eat anything from an animal origin.

Ingredients:
1.5 kg of codfish, left soaked in water for 48 hours
4 tbsp. spoons of olive oil
4 tbsp. of butter
2 onions, chopped in small pieces
4 salted sardines, remove the bones and leave soaked in milk for 4 hours
1/2 tsp. of cinnamon
1/2 cup of dry white wine
3 cups of milk (or more, if needed)
2 bundles of parsley, chopped to small bits so it fits into a 1/2 cup of polenta (in which you can melt a small amount of cheese)
Season with pepper and salt, to your liking.

Preparation:
1. Chop the cod and check to see if there are any bones left.
2. Heat the olive oil and butter on mid-high heat. Add onions, sardines and cinnamon, then simmer for 10-12 minutes.
3. Add pieces of cod, pour in the wine and milk and let it boil. Lower the heat and leave it boiling for about an hour. If the liquid gets low, add more milk. Add parsley, season the dish and serve with cooked polenta.